The Lord Mayor’s Show – See the Best of London pageantry

The City of London is well known for its many ceremonies and the Lord Mayor’s Show, held every year on the second Saturday in November, showcases the best of London pageantry and pomp.

So, if you’re ready for another quirky, historic, colourful and noisy City ceremony, get ready with your camera, your warm coat and stout shoes because the Lord Mayor’s Show is rolling back into town this weekend, on Saturday 13 November. 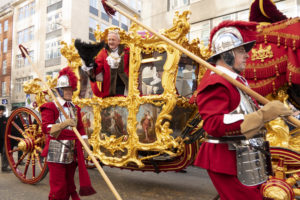 Why do we have a Lord Mayor’s Show?

Why do we have an annual procession celebrating the incoming Lord Mayor? It dates back to the 13th Century when King John needed the support of the City of London and to attain this, the King reaffirmed the City’s right to appoint its own Lord Mayor. But in return, King John insisted that the newly elected Lord Mayor should show his loyalty to the king by swearing loyalty to the crown.   The City of London’s Lord Mayors have therefore been swearing allegiance and promising loyalty to 34 monarchs over the last 800 odd years.  Originally the Lord Mayors travelled to Westminster on horseback to swear loyalty, and later by barge on the River Thames, and this is where the term “floats” comes from in relation to parades.  Now, the Lord Mayor only goes as far as the Royal Courts of Justice to take the oath before the Lord Chief Justice.

In 2020 there was no Lord Mayor’s Show due to Covid and the sitting Lord Mayor, William Russell, had two years in office.  The new Lord Mayor is Vincent Keaveny, and he will be the 693rd Lord Mayor of the City of London.

Mishaps and a Coach fit for a Disney Princess

Has the parade always run smoothly?  No, of course not!  In the 15th century two barges collided on the Thames, resulting in at least one death and in 1711 one Lord Mayor broke his leg when he fell from his horse during the parade, resulting in subsequent Lord Mayors travelling by coach.

The Lord Mayor of London’s State Coach was first used in 1757 and is the oldest ceremonial vehicle still in use.  You can, in fact, see the coach outside the west wing of Guildhall before the parade on Saturday.  The coach is well worth a look, as how often do you see a gold coach? It will be drawn by six horses, two fewer than the monarch’s coach, and will be accompanied by liverymen from the Company of Watermen and Lightermen carrying oars, recalling the time when the Lord Mayor travelled by barge. 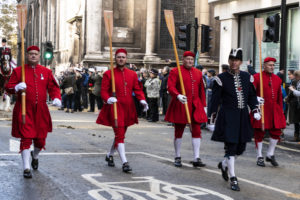 The Show Must Go On

The Lord Mayor’s Show in 2020 was cancelled due to Covid, but it is not the first time the parade did not take place.  It was postponed in 1625 and 1665  due to an outbreak of plague, and in 1639 the parade disappeared due to Puritan opposition.  The Great Fire in 1666 also put a stop to it and it did not take place for another five years while the City was busy rebuilding. In 1831 it was cancelled again, due to riots which took place after the Reform Bill (which intended to reform Parliament) was defeated in the House of Lords.  Surprisingly, the two world wars did not stop the parade and in 1915 the parade was a recruiting show, comprised of soldiers, including some soldiers direct from the trenches, and designed to encourage others to enlist.

With music, marching bands, giants and colourful floats there is a lot to see.  128 floats will take part including the Band of the Grenadier Guards and Coldstream Guards, the Florence Nightingale Museum, livery companies, Bart’s Hospital Volunteers, City companies and more regiments than you can shake a stick at, to name but a few.  After a year’s absence the floats promise to be particularly spectacular, and include a life-size model of an elephant, Japanese taiko drummers, and the tallest fire engine in Europe. 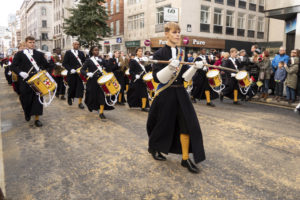 The parade begins at 11 am and you can view it from between Bank and St Paul’s, and along the Embankment and Fleet Street.  The parade ends by about 2.30pm when the new Lord Mayor will be back at the Mansion House. From 3 pm City of London guides will be giving free tours from No 1 Poultry, just opposite the Mansion House and free tours will also be available at Guildhall Art Gallery from 1.15pm.